“If enough of us want, no demand, peace and beauty, we're going to get it.”- Doris Piserchia

A brief history of Beanie. (Introduction) Part I
Hi. I’m David, and Beanie was and is a dog of the Sixties. Born on a farm in the Catskills, NY, a beautiful blonde collie/shepherd mix (shaped like soybean when curled up) was adopted by my dear friend Mickey to keep his other dog, Boisie, company. I took them both for a while and they went to college with me. That was when I became aware of Beanie’s soulful singing as she accompanied my playing the piano and harmonica. We moved to the East Viliage, in NYC, Beanie and me. I loved Beanie, of course, but so did all who met her. In my quest to make people (and me) happy, I started to perform with Beanie who soon became known as Beanie the singing dog. We performed as a duo until we formed the band (“Beanie and the Beaniettes”). For ten years we sang in clubs and new wave vaudeville shows and worked as a volunteer performers for mental health hospitals. We were also regulars for years on Cocoa Chrystal’s public access cult tv show, “If I Can’t Dance, You Can Keep Your Revolution!” (Quote from Emma Goldman).
We lived in a storefront, called, “Conscious Decision,” where, in addition to rehearsing and performing, I started to design shirts inspired by Beanie, who made me realize that all animals and lifeforms are spirits that connect to us in a deep and simple way (I told you she was a dog of the sixties). Beanie became an early “spirit animal.” See for yourself the power and charm of a Beanie shirt. Complete satisfaction guaranteed!


"My father was a simple Shepherd and my mother, a young Collie. When I was born, my father made good fun of my bean shape and called me "The Bean."  Soon, the Bean became  "Beanie."
I was a  sweet dog and was loved by my parents and brothers and sisters and pretty much everyone I met.
As a young dog, I loved musicals. I would sing all the time, mainly show tunes.
After some short educational experiences, I took off for New York City.  Performing in bars, clubs and on the street.  I was now singing the  blues and became a minor celebrity in the '70's, often appearing on Coca Chrystal's Public Access TV show.
I lived for 17 years and loved to chase seagulls till the end."
That's the story of the first Beanie the singing dog.

Beanie the Singing Dog 2.
Same type of dog as the first,  with another fantastic voice.
How can there be more than one Beanie I wondered? Yet, there were.  Beanie the Singing Dog 2 released many songs and achieved local fame here in Vermont.
Now there is Beanie 3?  No, not exactly, but a new type of dog, a hound who loves to track but not a great singer yet.  Her name is Charlize. 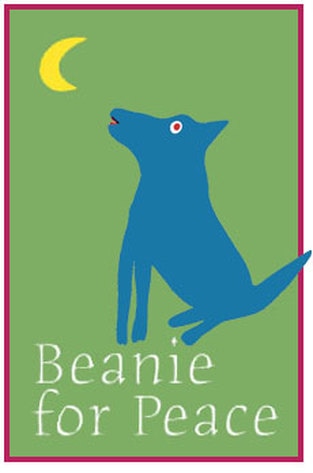